Mama Theater is a baby cart accessible venue equipped with a private space to change diapers and breastfeed babies. Enjoy the movie about older folk living happily narrated by Kirin Kiki.
*This event is for adults accompanying babies only. Sound is lower and lighting is brighter than a regular theater setting.
*No English Subtitles 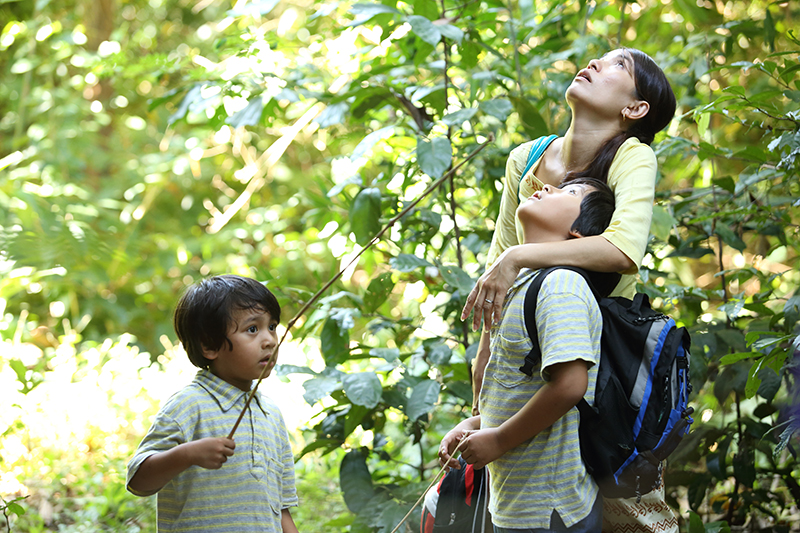 Architect Shuichi Tsubata and his wife Eiko live surrounded by forests in a suburban development in Kasugai, Aichi Prefecture. They maintain a self-sufficient existence and adjust their lifestyle accordingly to the four seasons. The documentary explores how to live fruitfully.

A presentation of VR works returns with a focus on Japanese VR that has been presented internationally. Experience the latest in ever evolving VR.
*No English Subtitles

Blue Thermal VR is an adaptation of popular coming-of-age manga “Blue Thermal” and is directed by an up-and-coming director. It was presented at the Market of this year’s Cannes International Film Festival.

Director: Shinichiro Ueda
Ueda began making films when he was in junior high school and continued to learn filmmaking by himself after graduating from high school. He specializes in films with high entertainment value and his latest One Cut of the Dead (2017), which opened theatrically in June this year, garnered critical praise when it was screened at film festivals in Italy and Germany.

Somewhere in Minato District, a space monster Eleking appears. The people in an office building escape through an emergency exit and find Ultraman Zero and the humongous monster fighting.

Made in SKIP City

A special screening of two films, Kobaton The Movie, a short film produced by filmmakers based in SKIP City that introduces attractions in Saitama, and a film about a heartwarming relationship between a grandfather and granddaughter, Wish Upon A Star – Grandad Wants to be a Truck Driver produced by Saitama Trucking Association. Enjoy short films that are packed with the charms of Saitama.
*No English Subtitles

Wish Upon A Star – Grandad Wants to be a Truck Driver

60-year-old Ryoji passed on his soba noodle shop to his adopted son-in-law and enjoys seeing off and picking up his granddaughter to school every day. He used to have a dream of becoming a truck driver. When his granddaughter asks why he gave up his dream, he decides to make it happen.

Aika Ota is working on a TV program that introduces Bushu Nakajima Konya, an old dye house. She accidentally runs into Enomoto, whom she had a crush on and her love remains unrequited. After that, she can’t concentrate on her work and Kobaton decides to cheer her up.

Director: Takahiro Horie
Horie is a filmmaker who participated in the New Directions in Japanese Cinema 2015 organized by the Agency for Cultural Affairs, and directed Hana, Kujira, Chichi (2016). He made his commercial debut with ANIMA!, the Opening Film at the SKIP CITY INTERNATIONAL D-Cinema FESTIVAL 2017.

In this year’s Camera Crayon, we present Distress Call and Rally & Smash produced by Kawaguchi Kids Movie Club and the best TV shows produced in the Audio Visual Learning Program. To be followed by a Q&A with the children who made the shorts. Enjoy the creativity of the children.
*No English Subtitles

During the summer holidays, a group of children dream the same dream, where a female scientist asks for help. The children discover a lab which appeared in their dreams and decide to go inside the building where scary monsters await.

A girl’s badminton team is always losing their games. By chance, they meet the coach of a strong team and ask her to coach them. Out of a desire to win and be stronger, they begin some tough training.

For the Audio Visual Learning Program, where grade school students of Saitama Prefecture direct and produce audio visual works, more than 650 programs were produced last year. The program showcases some of the very best that were produced from the unique point of views of children including Hitotsubu datte mottainai.